Get Faster & Improve Performance By Training Your “Weaker” Leg?

Having large leg asymmetry’s in strength and power can increase the risk of injury and potentially negatively affect athletic performance [1]. While often considered independent, injury and performance go hand in hand and the relationship between these two capacities are often overlooked in regards to overall sports performance [2]. Brown et al. [2] makes a very important point that “in some cases, injury prevention and performance enhancement are pragmatically one in the same.” Assessment of leg asymmetry’s is usually performed on force plates with single leg jumping and hopping or on an isokinetic device testing single joints through a range of motion at a certain speed. Generally, isokinetic strength deficits of greater than 15% are considered to increase the risk of future hamstring muscle strains by up to 2.6 times [1]. If injury prevention and performance are somewhat synonymous, what kind of performance improvements could we observe if between leg deficits were reduced?

Brughelli et al. [1] investigated vertical and horizontal force deficits between legs in injured vs. non injured Australian rules football players (ARF) during running at 80% of maximum speed. 22 Western Australia players were placed in either a previous hamstring injury group (IG) or noninjured (NIG) group. The injured players had to have: 1) had an injury history of 1 or multiple hamstring injuries to 1 leg only, 2) had caused the athlete to miss at least 1 week of training, and 3) for the injury to have occurred less than 2 years prior to testing. The testing protocol had athletes run at on a non-motorised treadmill at 80% of their maximal speed. From this treadmill, researchers were able to collect data on a range of variables that effect sprint speed such as horizontal and vertical force, leg stiffness and contact times. 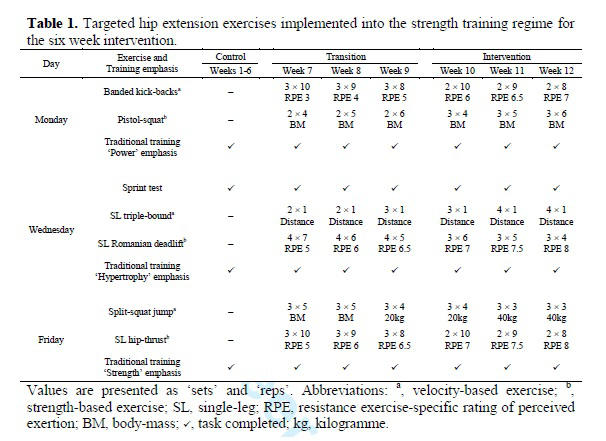 So What Happens If We Correct This Deficit?

Brown et al. [2] published a brand new case study investigating a single rugby athlete. The athlete performed 4x6sec maximal sprints on a non-motorised treadmill. The first 6 weeks were used as the pre-test (control block) and the last 3 weeks were used as the post test (intervention block) for comparison. From the first 6 weeks of sprinting, a consistent “strong” and “weak” leg of the athlete was determined based on the data from the non-motorised treadmill. Once determined, a targeted training program was implemented to the athlete’s current strength training regime for the following 6 weeks. This targeted hip extension program was only performed on the “weak” leg and is shown in the graphic below.

The athlete made a very large improvement in horizontal force of his “weak” leg (26%) between the control and intervention block. In turn, decreasing asymmetry of horizontal force (16 to 13%). 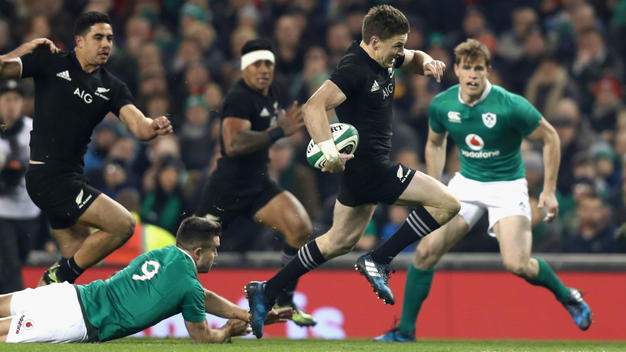 As shown from the research above, reducing leg asymmetry can not only reduce the potential risk of injury, but improve sporting performance. However, testing leg asymmetry’s can be an expensive task with the equipment and data analysis required. Luckily, if you have an iPad or iPhone, there is an app called MyJump 2 that allows you to measure leg asymmetry from a simple depth jump. While a depth jump won’t give you the variables from the above research such as horizontal force, it does give vertical force and lower leg stiffness which is definitely worth looking at. If you’ve had previous hamstring injuries, then this most likely won’t show up in this test but performing the above program on your injured leg may help in the long run. Furthermore, I have written a hamstring article detailing exercises to prevent further hamstring problems HERE.
Once you’ve determined if you have any asymmetry’s between legs when using My Jump 2, then you can look to perform exercises in addition to your usual training program that target vertical force and stiffness. For example, single leg squatting, single leg jumping, single leg hopping and skipping. Testing yourself regularly will provide you with the best information on how you are responding to your additional “weak” leg training. This provides another tool to your training tool box where sometimes adding more work for a certain component of fitness it just cutting into your recovery. By just decreasing deficits between legs, you can potentially improve the performance parameters without a lot of extra stress and build towards being a more robust athlete. Here’s a how to use MyJump 2 for asymmetry testing.
asymmetry power rugby speed sprint

1.            Brughelli, M., Cronin, J, Mendiguchia, J, Kinsella, D, Nosaka, K., Contralateral leg deficits in kinetic and kinematic variables during running in Australian rules football players with previous hamstring injuries. Journal of Strength and Conditioning Research, 2010. 24(9): p. 2539-2544.
2.            Brown, S., Feldman, E, Cross, M, Helms, E, Marrier, B, Samozino, P, Morin, JB., The Potential for a Targeted Strength Training Programme to Decrease Asymmetry and Increase Performance: A Proof-of-Concept in Sprinting. International Journal of Sports Physiology and Performance, 2017. Epub.
How To Program For Strength Training Without Knowing Your 1RM Prev
Back to Blog
Be A Better Player, Not Just A Better Athlete Next
Back to Blog