The Agility Ladder Myth: How Should You Train For Speed & Agility? (Part 4)

Speed or velocity is defined as distance / time. Meaning, the more distance you can cover in the period of time, the faster you will be. If you’ve been involved in land based running sport, you’ve probably been introduced to the speed/agility ladder and been put through different drills all the goal to promote “quick feet.” Most likely with the end goal of being able to cover ground quickly.

The world class sprinter used in 2 of the studies below, the first white man to run under 10sec in the 100m.

Unfortunately, creating fast feet or footwork doesn’t train you to produce force quickly in the horizontal direction. While ground contact times can be short, (longer during the acceleration phase than at maximum velocity) large magnitudes of force need to be applied during these small windows of time. These large magnitudes of force directed horizontally allow for that large stride length you see sprinters have when they “climb” out of their accelerations. Furthermore, improving short sprint speed from a strength/power point of view is more than just getting stronger or jumping higher. I’m sure that if you’re an athlete of some sort, you’ve heard to just get stronger or squat more and you’ll get faster. But what about some evidence?

A study by Morin et al., [1] looked at the 100m sprint which involved 9 physical education students. 3 national level sprinters and 1 world class sprinter. Since this article is focused on short sprint speed, only the 4sec distance will be considered. The authors found significant, strong correlations between the index of force application (direction force is applied), horizontal GRF (ground reaction force in the horizontal direction) and 4sec distance. However, no significant correlations were found between vertical GRF and 4sec distance. Average and maximal power output were also significantly correlated with 4sec distance.

This has been further backed up by a recent paper by de Lacey et al., [2]. 10m and 40m sprint performance were measured comparing backs and forwards in elite rugby league players. Backs were found to be significantly faster than forwards in both sprints, however there were no significant differences found in vertical force or sprint kinematics. Significant differences in relative horizontal force and relative power were found between forwards and backs.

Recently, a study by Morin et al., [3] looked at elite (international level) and sub elite (French national level) sprinters over a 40m distance. The authors found the horizontal propulsive force to be significantly correlated with 40m sprint performance. In contrast, vertical force was NOT correlated with sprint acceleration performance and more importantly, there was a tendency towards a negative correlation between vertical force and 40m sprint performance. 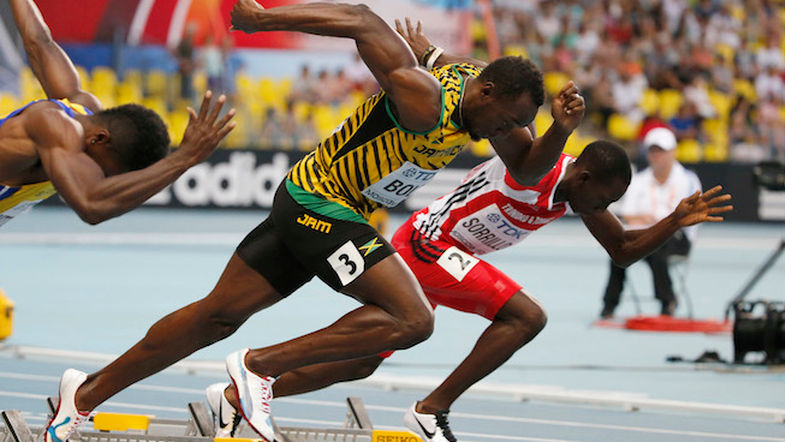 These data suggests that the direction force and power is applied in (horizontal direction) is more important than the magnitude (how much) of force and power produced overall when it comes to short sprint performance.

Moreover, athlete’s that can “push” more in the horizontal direction are faster. In addition to this, producing more vertical force over horizontal force during your sprint (i.e. accelerating with a very upright posture orientating force more vertically while sprinting), may negatively impact your 40m sprint performance.

A simple quick feet ladder drill only allows the athlete to make short choppy strides where minimal amounts of force will be applied as the center of mass does not need to be propelled forward very far. From kinetics (forces) to kinematics (motions), the ladder and the sprint acceleration are far too different for there to be any carry over to speed and sprint performance.

Here are a few exercises that can be implemented in your training to develop horizontal capabilities to improve short sprint speed which is a vital aspect to performance in many team and individual sports. Obviously nothing takes place of your actual speed/sprint training but these exercises can help develop the ability to orientate large amounts of force horizontally.

In this post HERE, I have given a rundown of horizontal exercises over the strength-speed continuum allowing you to choose what is appropriate when and pair exercises for contrast training.