This podcast by the Science of Running guys Steve Magness and Jon Marcus encapsulates what sport and training really is, and that’s art. While directed at track athletes, there is still a lot to take for other sports.

They talk about how as coaches we have this love affair with the idea of “mathematical exactitude” meaning if an athlete hits ‘x’ time for a certain run during a training session, that it will translate to ‘x’ race time on competition day. The issue they raise with this is:

The painter and the artist analogy is drawn from Charles & Jackson Pollock. “Everyone’s heard of Jackson Pollock because he was an artist. He took risks. He did something wildly different and a lot of his stuff failed and did not work but some of his stuff did work and it was so new and innovative that people took note. Charles Pollock was taught how to classically paint. He was taught by a master. This is the style. These are the constraints You need balance. You need this. You need these types of tones etc. All he did in his career was paint portraits. It wasn’t art because there was no risk.”

The problem with the painter is that they have their whole race planned down to the split times. If they don’t hit that split time, the story they tell themselves is self-destructive. They are thinking more about the clock than the actual race. Then they miss the opportunity to make art.

Previously at the 2017 National Championship Rugby team, the Austin Huns, attack/backline coach Danie de Villiers gave our backs and offense the freedom to be artists. One of his quotes to our backs goes:

We have our playing structure. It could be seen as the artist’s blank canvas. How the canvas is filled is up to the artists. And that’s our players. The structure or canvas is there as a guide, but the art that is portrayed inside comes down to playing what they see in front of them and taking the risk when the situation calls for it. 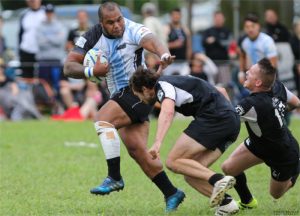 When given many constraints like Charles Pollock’s painting; or having to run a certain split time during a race to think you have a shot at winning; or are given a playing structure that must be adhered to regardless of the opposition, there becomes a fear of repercussion from failure and a negative story plays in an athletes head when they don’t adhere to these constraints.

As Paddy Upton, Head Coach of the Sydney Thunder Big Bash T20 Cricket team states “In sports teams, people don’t actually have a fear of failure as much as they have a fear of repercussion from the failure, whether it is from the media, from the coach, from the fans. When coaches reprimand, shout, gesticulate when somebody makes a mistake, when a captain gesticulates on a field at someone who misfields or drops a catch, the player then becomes terrified to make that same mistake. And when you have become scared of making the same mistake, you actually put yourself in a [state of] physical readiness to make that mistake.”

Let your athletes be artists. Let them play. Race each other rather than the clock. Create fun competition in training. Create challenges they have to figure out their own solutions for. Provide a canvas for athletes to create art, not a set of rules.

The Myth of Core Stability Prev
Back to Blog
Stop Creating Robots. We Need Creativity. Next
Back to Blog